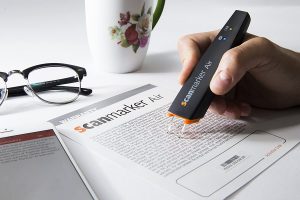 “OCR” is an acronym for “optical character recognition.” It refers to the conversion (usually electronically) of images of printed, typed or handwritten text into computer text data. The source can be a scanned copy or photograph of any document or other graphic image that includes text. OCR is commonly employed by governments and business for digitizing printed texts – passports, bank statements business cards, receipts, etc. – so the information can be electronically edited, searched, stored and otherwise used by computers.

OCR is a key component of the localization process, particularly translation. Typically, various printed documents, including marketing materials, instruction manuals, labels, warranties and legal statements are first scanned, and then using OCR are converted into text files which are readable by translation software or human translators. Because of the sheer volume of material to be translated and the many target languages required, automatic transcription is almost mandatory. OCR is a key component of this process, eliminating the need to hire language experts or to enter source text by hand.

A brief history of OCR

In 1931, Emmanuel Goldberg presented his “Statistical Machine”, a device employing photoelectric cells and a pattern recognition algorithm to search metadata on microfilm records. His patent was later acquired by IBM.

In 1974, Ray Kurzweil worked to develop “omni-font OCR”, which can recognize text in almost any font. This technology was used to develop a reading machine for the blind that could read text aloud. It required two related inventions: the CCD flatbed scanner and text-to-speech synthesis. The finished product was unveiled in 1976. Kurzweil Computer Products released a commercial version of this OCR computer program in 1978.
An early Kurzweil customer was LexisNexis, which purchased the program in order to upload legal and news documents onto its online databases. In 1989, Kurzweil’s company was sold to Xerox, which wanted to monetize the conversion of paper to computer documents. This new business was spun off as Scansoft.

In 1999, OCR became available as an online service when Expervision released WebOCR. It operates in a cloud-computing environment, working with smartphone applications for real-time foreign-language translation.

A research group at the Indian Institute of Science announced the development of a Print-To-Braille tool in 2014. This is an open-source interface that can be exploited by any OCR application to create Braille books from scanned text images.

Two general classes of OCR algorithms exist, the output of which may be a ranked list of possible character candidates.

“Matrix matching”, or “pattern recognition” performs a pixel-by-pixel comparison of an image to a set of glyphs stored in a dictionary. This algorithm is most effective with typewritten text and can be unreliable when new fonts are encountered.

“Feature extraction” breaks down a glyph into distinct features – loops, intersections, etc. – comparing it against an abstract topological model of different characters. This is the method most often used in modern OCR software.

OCR accuracy is significantly improved when the output is compared against a dictionary of allowable words, although this can create problems with proper nouns or other legitimate words not in the dictionary.

Basic OCR algorithms output a stream of unformatted characters, whereas more sophisticated applications are able to reconstruct the page layout of the source documentation. They may also be capable of performing “near neighbor analysis”, an error-detection system that tracks the frequency of word combinations and flags those that are rare as possibly wrong, such as “New York” versus “Now York”.

Grammar checkers are also commonly employed to improve accuracy by supplying context, determining for example whether a word is a noun, verb or adjective.